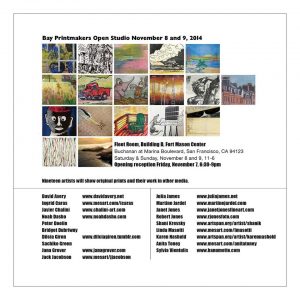 Yes, I will be returning to Open Studios this year with the Bay Printmakers at Ft. Mason. If you have not had a chance to view my print and book, Obeliscolychny, this will be an excellent opportunity. New this time around will be my contribution to the Al Mutanabbi Street Project (see the previous post below), as well as a work in progress consisting of four etchings based on yet another excerpt from Rabelais, The Coming of the Cocklicranes or His Kingdom Restored. In addition to being selected by two jurors as one of their ten “must see” artists at Open Studio, here are some recent shows and awards I have received:

Honorable Mention, Real and Surreal. In addition, I will be participating in a Four Person Show at Sandra Lee Gallery in 2015.

I have participated in 18 competitive and invitational shows this year, including a show at the Curator Gallery in New York, as well as a selection from the IPCNY’s New Prints shown at Christie’s, and and a show selected from participants in the North American Print Biennial of the Boston Printmakers. I will have a complete listing for 2014 available at Open Studios.

Ex Libris—In Absentia, a hard ground etching on copper was created in response to a call to printmakers from around the world to engage with and explore the implications of the destruction of Bagdad’s intellectual and bookselling district on Al Mutanabbi Street by a car bomb in 2007. The Al Mutanabbi Street Project seeks to draw attention not only to the attack in Bagdad, but through the idea of “Al Mutanabbi Street starts here” to raise awareness of the connections between Bagdad and the threat to culture (artistic and literary thought and exchange of ideas) in the face of the potential for intolerance and violence on our own street.

Woland famously remarked in Bulgakov’s “The Master and Margarita” that “Manuscripts don’t burn”, meaning…what, exactly? Of course, they do burn, and so do people, as evidenced by this project, but perhaps it is the sense that ideas don’t burn that makes this such a powerful statement. In which case, where do they go, when so emphatically rejected by the arbitrary and malevolent forces of “the real world”?  Is there some sort of continuum, a “space behind the curtain” so to speak that allows minds to connect and reconnect with the essence of burned manuscripts? These are some of the questions that came to mind in the process of exploration engendered by this project.